I feel a little bit smug. I’ve been watching a couple of bloody brilliant Aussie TV shows, and for once the rest of the world has to wait! (And here’s hoping other countries have the sense to buy these shows up.)

One of them finished last night, and the ending was so perfect I had that same glow-y feeling in my chest I get from a really great book.

Puberty Blues is about two best friends, Debbie and Sue, growing up in Cronulla in the 70s. Cronulla is an outer suburb of Sydney in an area famous in the 70s for its surfer tribal culture and more recently for the racist riots in 2005.

Puberty Blues is a subtle, impressive example of what I was trying to come to grips with.

Debbie and Sue are desperate to get in with the cool kids, and they eventually manage it by being a bit naughty and a bit mean, and mostly by catching the eye of the boys. Being someone’s girlfriend has nothing to do with liking or even knowing – it’s all about status and belonging.

Girlfriend duties include: sitting on the beach for hours watching the boys surf; buying meat pies and chiko rolls for the boys to eat when they come in, when you will also hand them their towel; and lying back to let him root you. Oh, and bringing the Vaseline – very important not to forget the Vaseline.

The casual rape culture depicted is absolutely chilling. It’s there subtly in the girls’ expectation of sex: it is not something you enjoy, it’s something you lie back and take. And it’s there overtly in the girl lying in the back of a panel van, a catatonic lack of expression on her face, while the boys climb in and out by turn.

Seeing that unsettles Debbie and Sue, but it doesn’t particularly stand out to them as wrong, or as having anything to do with them. The way they react to it – by not really reacting at all – is what makes it so chilling. They have no context to understand why it unsettles them.

They enjoy being the cool kids and having boyfriends. They also begin to experience the way a girl’s worth comes entirely from her boyfriend. The way a girl becomes a laughing-stock in a second if she goes against her boyfriend’s wishes – all ties of loyalty and friendship cut.

Again, they don’t consciously rail against this stuff. They don’t understand it, even while they don’t like it.

Sue starts to feel more and more restrained and angry inside her relationship. Finally, when her boyfriend’s a complete asshole to her in front of everyone, she says, “You’re dropped.” She doesn’t mean to – didn’t even know it was going to come out. It’s that part of her she doesn’t understand – the part that’s unsettled and angry – acting for her. But she doesn’t go all girlpower I’m-better-off-without-that-dickhead. She doesn’t understand herself or her actions and still craves the social belonging that comes with a boyfriend.

Debbie is dropped by her first boyfriend for being frigid (turns out all the Vaseline in the world can’t make up for really not wanting to have sex), then falls in love with the beautiful Gary. In heart-stopping, world-stopping first love. Sue asks Debbie over and over again to tell her the story of how she and Gary sat in her room and just talked all afternoon. Just talked.

But even the beautiful Gary is only a fucked-up kid, dealing with life outside of school.

Debbie and Sue have seen the reality of what it takes to be a cool kid, and they start, tentatively, to see the world on the other side of school – a world that’s bigger than just the cool kids and the outcasts.

They start to realise that the superpower they have is each other. In a world where all ties can be cut in a second if you act out of turn, they have the kind of loyalty that can get them through anything. 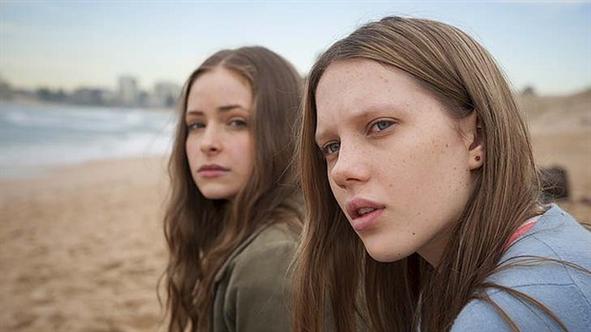 They see the girl in the back of the van again, the boys climbing in and out to take turns. They still watch her from a distance, and vow to each other that the world would have to go through one of them first, to get at the other. Then they realise: That girl doesn’t have anyone to stand between her and the world.

And then they realise: Maybe she has us.

It’s such a superhero moment when they decide to walk over. “We’ll just get up and walk,” they tell each other. They challenge those boys who are the gods of this small world, and they get the girl out of there.

They’re so high on what they’ve done – so disbelieving and amazed – that they want to do it all over again. So they do the next best thing. They go down to the beach, with a surfboard, and run into the water, where girls are not allowed to go.

The cool kids sitting on the beach call them every name they can think of, but Debbie and Sue just laugh back at them and say, “Get us a chiko roll!”

The girls, watching fully clothed from their “girlfriend” stations, watch with contempt but also with a kind of dawning confusion. And awe.

Debbie and Sue are a product of their culture. They don’t have the means to stand outside it and understand it. This made their eventual liberation so much more powerful than if they’d been on a crusade from the start.

Their liberation came from acknowledging that their own feelings about the world are the only compass they need. That they get to say what’s wrong and right.

This is how I want to use the historical context for my heroines. Not to have them understand right from the start: I am oppressed, and my fellow-women are oppressed! But to have their experience and their knowledge not match up. For that to be an unsettling thing, and for their anger and frustration to become more than they can keep inside. And when it comes out it’s not necessarily going to be comfortable, and they’ll probably want to take it all back.

In the kind of society Debbie and Sue are growing up in, the love of a teenage boy cannot empower or liberate them. But their friendship with each other can.

I look around, and here I am - housewife and aspiring romance novelist. This seems unexpected.
View all posts by anna cowan →
This entry was posted in Feminism, Rave, review, TV and tagged Puberty Blues. Bookmark the permalink.