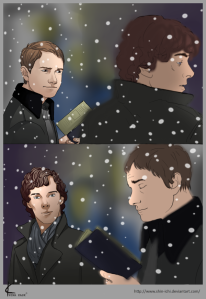 I just watched the first episode in the BBC’s 3-ep mini-series Sherlock. It’s Sherlock Holmes, but in 21st Century London and with a couple of gadgets he never had before. And a riding whip.

He’s kinda mean, too. Meaner than I remember. But I think it works. They’re riding the sociopath/psychopath line with him – the “what will happen when he gets bored?” line.

Which made for one of my favourite exchanges in the episode.

Watson is really well-drawn. Better than I’ve seen him in any other rendition – much more morally ambiguous and more a character in his own right, rather than simply existing in relation to Holmes.

So Watson has just been left in the lurch by Holmes for the first time, and a police detective who really doesn’t like Holmes warns Watson off him. She explains that he’s a sociopath – that he gets off on murder, and he has no friends for a good reason.

And the gorgeous thing is that it reads like the best kind of romance novel. She thinks she’s warning him off, when in fact she’s stoking his interest and his sympathy.

This is something I love about this adaptation: Because it’s set in the modern day, they approach the homoerotic question head on. You know, that one academics have been going on about for years. The homoerotic v homosocial one.

They’re sitting in a restaurant and Watson starts asking questions about Holmes’s love life. He rules out women, then broaches the question: “Oh, do you have a boyfriend? I mean, that would be fine–”

“I know that would be fine,” Holmes interrupts, looking at him with a kind of withheld skepticism.

These boys have loads of chemistry. No doubt Watson will be given a girlfriend in the near future. 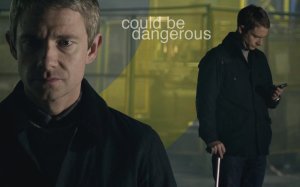 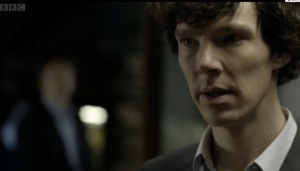 I look around, and here I am - housewife and aspiring romance novelist. This seems unexpected.
View all posts by anna cowan →
This entry was posted in review and tagged benedict cumberbatch, dr watson, homoerotic, homosocial, martin freeman, sherlock, sherlock bbc, sherlock holmes, tv. Bookmark the permalink.